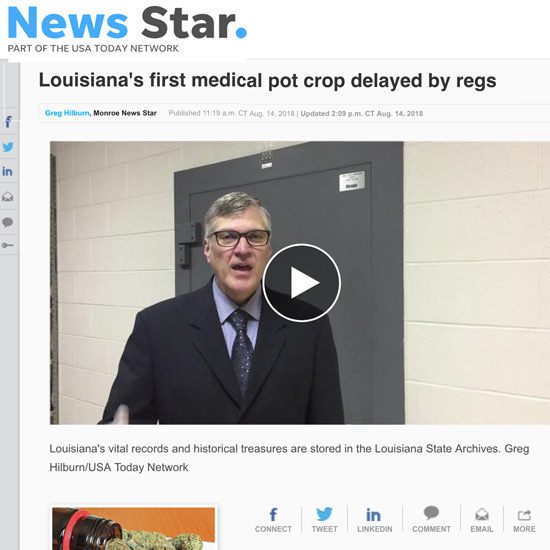 This piece was originally published in News Star. Click here to view the article.

Louisiana’s first medical marijuana crop has been delayed by the regulatory process, testing the patience of the grower, pharmacy owners and patients.

GB Sciences, the grower and partner of LSU AgCenter, had hoped to provide product to the state’s nine licensed medical marijuana pharmacies by September, but now it appears the earliest harvest would be November.

John Davis, president of GB Sciences, which is growing the product in Baton Rouge for the LSU AgCenter, said his company first submitted paperwork last spring to the Louisiana Department of Agriculture, which is regulating the industry.

“They have to finish their standard operating procedures and suitability test (background checks) by the state police,” Strain said. “I know they’re anxious to get into production, but it’s incumbent on them to get the information to the parties who need to review it.”

“We continue to be available to sit down with the (Louisiana Department of Agriculture) at a moment’s notice to work through any loose ends because we’re ready to move forward,” he said.

Davis said he met with all nine of the pharmacy license holders last week, where they expressed their concerns about the delay.

Among them was Greg Morrison, who secured the license for the northeastern Louisiana region and will open a pharmacy in West Monroe.

“It’s become pretty frustrating and illustrates the pace of government and the pace of business operate at two separate speeds,” Morrison said. “We really need to get moving.”

Medical marijuana was legalized in Louisiana 40 years ago but never implemented. A 2016 law finally paved the way for implementation. It can only be prescribed as a pill or oil.

The law allows the LSU and Southern University agricultural centers to select business partners to cultivate and produce medical pot, although the progress at Southern has been hampered by legal challenges with its chosen grower.

The Louisiana Board of Pharmacy chose the nine medical marijuana pharmacies in April. A 10th license could be awarded depending on demand.

Davis said GB Sciences, a public company, is investing $10 million to $12 million into its operation, while pharmacy owners are investing in the build-out of their facilities and other expenses without any revenue being generated.

“I understand we’re plowing new ground in Louisiana and there’s no model for the (agriculture department); they want to make sure they’re doing it right,” Davis said. “But the regulations are in place and there also should be a balance of the need for business to move forward.”

When asked what the time line might be for regulatory approval, Strain said, “I can’t say when it will happen.”

Strain said his regulators have scheduled another meeting with Davis Wednesday afternoon.