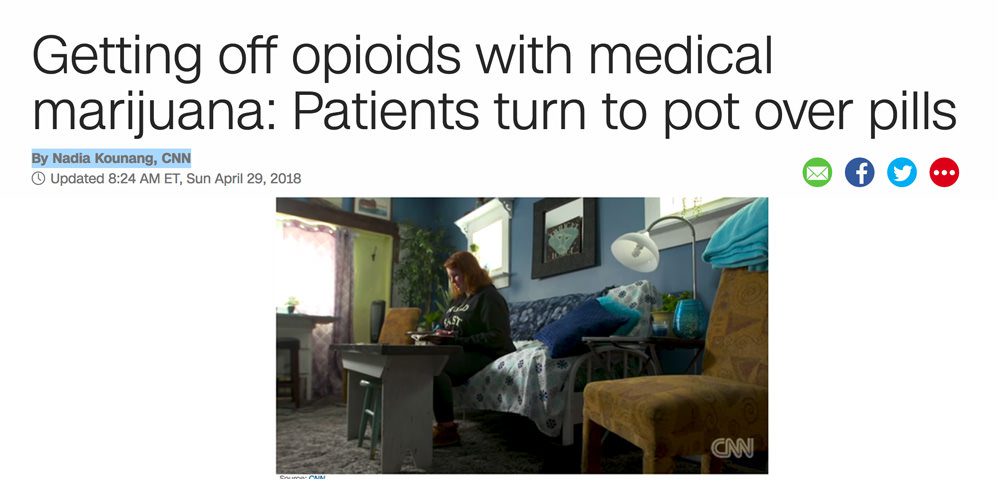 This piece was originally published by CNN. Click here to view the article.

(CNN)In 2016, opioids killed more Americans than breast cancer. The drug overdose epidemic has become one of the most concerning public health issues of recent time, and in an effort to stem the tide, moreg and more patients and doctors are turning to pot over pills.

For much of the past two decades, 51-year-old Angie Slinker took a cocktail of narcotics, antidepressants and anti-anxiety medications to manage the pain stemming from a car accident in 1998. She had between 50 and 60 surgeries, but her pain persisted, and doctors kept giving her more pills.

“It was just a vicious cycle,” she told CNN Chief Medical Correspondent Dr. Sanjay Gupta. “You started taking something for pain, and before you knew it, you were into another surgery. Which brought on anxiety.” To treat the anxiety, doctors prescribed more pills. And when she felt depressed, they added even more medications.

All the drugs left in her a fog. She spent most of her days in bed. When Slinker woke up, she was in pain and looking for immediate relief.

By 2012, she was taking up to 25 pills a day. She weighed close to 350 pounds, and she didn’t want to move, because the medications sapped whatever will or desire she had. “I can’t do this anymore. It is killing me from the inside out,” she told her doctors.

The withdrawal symptoms were severe. Slinker said she was moody and irritable from the pounding headaches and constant nausea. Without any medications, her hands began to spasm and freeze.

Her then 22 year-old son suggested cannabis. The relief was quick. “I realized immediately that there are medicinal properties within cannabis,” she said.

It didn’t completely eliminate her pain, but pot allowed her to live again, she says. She was able to play with her granddaughter and participate in life. “I’m never going to be pain-free, ever. But cannabis has given me a reason to live,” Slinker said.

But it is also illegal in her home state of Indiana. “I could have bought cannabis off the street. But that was not me. I wanted to do it the right way. I wanted to do it legally,” she said. So in July 2012, Slinker moved to Maine.

Medical marijuana has been legal in Maine since 1999. The state has one of the top ten highest rates of opioid overdose in the country. In 2016, the rate of overdoses from opioid drugs in Maine was nearly double the national rate. The number of heroin related deaths has jumped more than fourfold since 2012.

For a state deeply embedded in the opioid crisis, Dustin Sulak believes that medical marijuana could be part of a solution. “There’s no pill, there’s no spray, no drop, no puff [that] can completely solve this problem,” Sulak told Gupta. “But cannabis, when it’s used in the right way, can take a big bite out of it.”

Sulak is a doctor of osteopathic medicine. He says he has treated hundreds of people with marijuana to wean them off opioid painkillers. He runs two outpatient clinics in Maine and started looking to marijuana as a potential solution when he noticed that a number of his patients were able to sustain their opioid dosages for years, never asking for more.

Production of natural opioids is triggered when the body experiences pain. But opioid medications can act as a signal to the body to stop producing endorphins; it instead becomes more and more reliant on the drugs. When the person takes more opioids, that increases the risk for overdose.

Sulak was curious as to why some of his patients didn’t need to increase their opioid doses, so he asked them what was different. “The answer was that they were using opioids in combination with cannabis. And they felt that it made the opioids stronger.”

Sulak’s review of the medical literature resulted in the same conclusion. He points out that when opioids are used in combination with cannabis in animals, marijuana can boost an opioid’s effectiveness without requiring higher dosages.

Slinker is now a patient of Sulak’s integrative health practice. Instead of taking 25 pills a day, she supplements smoking a gram of marijuana every three or four weeks with marijuana tinctures, oils and vapor. She also uses a drug called naltrexone to help with her autoimmune-related issues.

She credits her life now to cannabis and wants others to know about it. “I want people to know that they have options. Do not be afraid to tell your doctor that you do not want these chemicals in your body,” she said.

Doug Campbell, another patient of Sulak’s, agrees that cannabis is a real alternative. “I don’t think I would be alive today if I didn’t have it,” he said.

Like Slinker, Campbell said he started off using narcotics to manage pain. He was 18 years-old when he fell off a roof and fractured three vertebrae in his lower back. But it wasn’t until he started getting involved in a more party lifestyle that opioids became more than just therapy.

After 32 times in and out of rehabilitation, he finally found a way to stop using opioids. “I have no cravings. I have no desire. I do not have any thought about it at all,” he told Gupta.

Dr. Mark Wallace, a pain management specialist and head of the University of California, San Diego Health’s Center for Pain Medicine, is seeing similar results in his patients. Wallace began investigating cannabis in 1999, when he received a grant from the state of California. He looked at the literature and realized that pot had a long history of therapeutic use for many disorders including leprosy, epilepsy and pain.

Within a decade, there were enough studies to convince him that marijuana was a real alternative to use in his practice. He estimates that hundreds of his patients, like Marc Schechter, have been weaned off pills through pot.

In the past 10 years, Schechter estimates, he took almost 40,000 opioid pills, all prescribed to him by his doctors. Percocet, fentanyl and OxyContin — they all worked, but when the dosage wore off, he needed more.

Schechter had a rare condition that flared up while he was playing golf in 2007. At the 17th hole, pain began radiating from his back. By the time he got back to his room, he couldn’t move his left leg at all.

Schechter was diagnosed with idiopathic transverse myelitis, an inflammation of the spine. He was eventually able to walk again, but the pain persisted.

Without the drugs, it felt like his leg was burning with pins and needles, as if it had fallen asleep. “It’s like that 24/7. Not a second of relief,” he said. He needed the drugs just to live.

Come aboard the cannabus: More seniors taking trips to get weed

“Were you addicted to them?” Gupta asked.

The drugs never interfered with his work as an attorney, but Schechter kept needing more and more of them. He started to question their effectiveness. Schechter told his neurologist, “I really am starting to doubt whether this is even having any effect because I’m in so much neuropathic pain.”

His neurologist had heard of Wallace’s work and referred Schechter to the clinic. The first night Schechter used marijuana, he took a puff or two from a vaporizer. “Within a minute, I had immediate pain relief. … [The pain level] was so tolerable that I was, like, in heaven.”

Patients and doctors across the country have told similar stories. But Dr. Nora Volkow, director of the National Institute on Drug Abuse, said anecdotes are not enough.

“We cannot be guided by wishful thinking. We need objective data,” she told Gupta.

According to the Drug Enforcement Administration, marijuana is a Schedule I drug, meaning it has no medical use and a high potential for abuse.

“We have enough evidence now that it should be rescheduled,” Wallace said.

Sulak wonders, “When will the medical community catch up with what their patient populations are doing?”